It seemed like such a good idea at the time; why not invite our good friends Claude and Georgie over for lunch with their kids and then head out for a bracing walk afterwards? Over the delicious food barely a tremor was felt in the ether; no premonition of what was to come. In fact the meal was excellent and all were in fine spirits (adults) and well behaved (children). In fact I've come to believe that the first sign of trouble became visible when we realised that we weren't heading to Golders Hill Park (a middle-class mecca) but instead to the wilder shore of Sandy Heath (an outpost of Dartmoor). 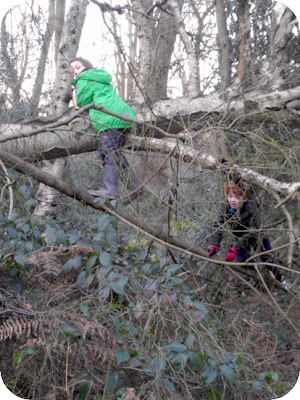 At first all seemed well as we booted up and marched into the dense forest. Nature sounds all around and plenty of climbing trees for the boys; old-fashioned fun. With this kind of freedom in mind the boys rushed ahead and up the steep hill to the ponds (former gravel pits essentially) since this was kind of the main feature of the walk. How though could we have foreseen that the swampiest pool of the lot would claim another victim; sucking its prey down into the clammiest of demises? In a sense this all took place off-camera as by the time us adults reached the crime scene the damage was done - Oliver's boot had vanished from the material world. 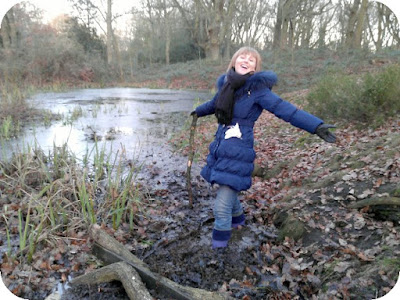 Now most of us would have accepted this loss with stoic resignation but not Georgie! Oh no. With barely a thought given to the dangers of the mire she waded in and began a forensic examination of the sucking mud. To say that it was malodorous, dirty, stinking work is barely sketching the awful reality and that was just for us bystanders! 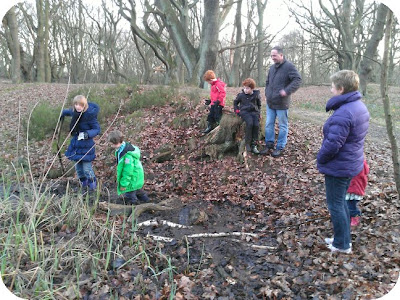 Needless to say that in time Georgie's determination rubbed off and we all, man and woman, lent a hand in the increasingly fruitless search for this missing boot. How could it possibly have vanished so completely from human gaze? Only the gurgling quagmire knew and it wasn't about to reveal the truth. In the end it took the intervention of Eve to bring us to our senses (possibly befuddled by bog gas as we were): 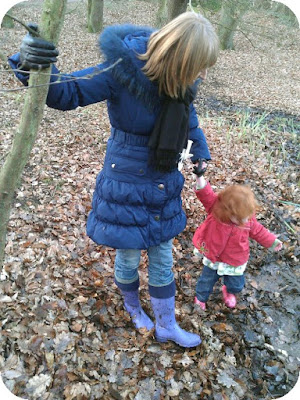 It's over was her simple message; let it go. Sometimes the marsh wins and that's an end to it. With these wise words ringing in our ears we retreated to our cars - all of 200 yards away. Yes it had been but a short walk but what an adventure! The primal power of nature has never seemed so immediate; a shade away from devouring us all. Yes I think that it's safe to say that we all returned from this stroll as changed individuals bonded together in the face of adversity. Just another day in London really.
Posted by Damian at 18:14