Some of you might remember that back in November I injured my back whilst stretching (believe it or not) and that I was barely able to walk let alone run. One of the reasons for this, I believe, is that I've been running in broadly the same type of shoes since getting into triathlon - usually motion control - as I was originally identified to be an overpronator. While fine at the time I don't think that these suit me any more. So over the past year I've been tinkering with a bit of barefoot running and this has proved a minor revelation; the only problem being that I kept losing the skin on my toes!

So last week, after proving to myself and my osteopath that I was functionally able to run again, I decided to treat myself to some new running shoes. This time though I was looking for something very unsupportive, something very minimal and close to being barefoot; so the other end of the scale essentially. At first the salesman in Runners Need looked a tad wary while I explained what I was looking for but all credit to him - he emerged with a couple of nice looking shoes and had me try them out on the treadmill. What fun! They both felt very light and the camera showed that I was midfoot-striking very cleanly and demonstrating no over-pronation whatsoever.

As a result I walked out of the shop with a pair of these little beauties: 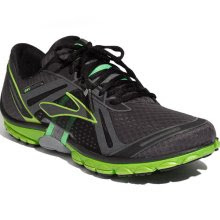 Now they don't come cheap, it's true, but none of my running shoes have ever been what you might call cheap! So this lunchtime I took them out for a short spin up to Green Park; just a quick 20-30 minutes really to see how they felt when used in anger but not for so long that my osteopath might get angry! I have to say that they feel great on my feet (light and responsive) but there's no doubt that I'm working my calf muscles much harder with these shoes. It just goes to show how much heel-striking I've been doing in the past without ever meaning to. Suffice to say though that my old shoes have been consigned to the bin!

This year has a real feel of deja vu about it doesn't it? Too many injuries and too many comebacks. Elvis would be proud. So, anyway, since inflaming a disc in my back, or something similar, I've been seeing a local osteopath (Robin Kiashek) on a regular basis. Up till now he's been dead against me doing any running since he believes that this is the underlying cause of my injury; so I've been on a diet of cycling and swimming. That's been alright but now he wants me to try to run again (10 to 20 minutes only) just to see if I can.

So today I decided to take the bull by the horns and see whether I was fixed or not. With Joshua at cub camp and Christina enjoying herself at a friend's birthday party the way was clear for some me-time. The only problem was that Robin was only giving me permission to run for a very short period and this meant that none of my usual routes were suitable (not even a quick trot around Highgate Woods). In the end I decided to make life simple and stick to a circuit of the local streets.

The weird thing was that when I set off I expected to feel stiff and unfit, which I did, but neither of these were my major problem. Instead with ever step I could feel my heel hitting the ground first and the shock from this impact resonating upwards to my spine! Now this wasn't painful but it was worrying and quite uncomfortable. So I made a determined effort to lift up my feet and strike with my mid-foot; which I managed to achieve but at the expense of realising how hard my shoes were making it to run properly!

It seems to me then that my old shoes (Brooks Addiction's I think) have been deforming my running style purely by being so highly cushioned. Looking at their sole it's obvious that the heel is very built up and that you're running on a wedge shape - so it's no wonder that my heel is being forced to hit the ground first unless I really try to counteract this effect. This also seems to answer a question that I've long pondered: why is it that children always seem to land on their mid-foot? Because they're always wearing flat shoes and so aren't forced to heel strike.

Overall then I'm very glad that I'm able to run again and without any pain; that's a huge improvement. The only problem is that I can't run in my current trainers - I will have to find something more suitable before putting on my running shorts again. I guess it's lucky for me that Christmas is around the corner....