Over the years, although less often post-kids, we've liked to head out into the countryside for a bracing walk - typically with the help of an OS Pathfinder Guide such as this one for the Chilterns and Thames Valley. The great thing now is that Joshua and Christina are of an age where they can complete a decent walk (of 5 miles or more) without too much difficulty or complaining! So with the sun shining we took ourselves off to Amersham for a proper stroll along the South Bucks Way.

As ever it wasn't far off lunchtime by the time we arrived in Amersham but I figured that we should at least make a start on the walk before stopping - if only to get ourselves warmed up. So we slogged up the hill out of town and up to the top of the ridge. This was well worth doing as the view was very pleasing and the sun shone warmly from the sky; enough so that Joshua was forced to strip down to his T-shirt! All in all it was very nice to be out in the fresh air and stretching our legs:

The funny thing is that while we were all keeping half an eye out for somewhere to lunch we never actually spotted anywhere right up until we stumbled into Chalfont St Giles! So we managed to complete half of the walk before lunch without anyone really noticing - although we were all quite ravenous when the sandwiches made an appearance!

Of course on the way back along the River Misbourne things started to fall apart a little (compared to our previous state of high organisation!). On the one hand there were quite a few guard-dogs hanging around to provide excitement while on the other some of our shorter legs were feeling a little tired by this point. Not that this was always obvious given Joshua and Christina's level of excitement:

Little by little then we edged our way along the valley and back towards Amersham. While I was aware of the sun edging ever closer towards the ridge-line the kids spent their time chasing a ball (pretending to be dogs) and rolling in the mud. Ah who am I kidding; Lenore was a more than active participant in the fun!

Hence it was left to me to be the 'adult' of the party and to shepard our weary feet along the valley. Apart from the hum of the main road it was very pleasant strolling along the grassy path and in some ways it's a shame that the temperature wasn't twenty degrees higher and we weren't able to just hang out and take in the scenery. Next time maybe. 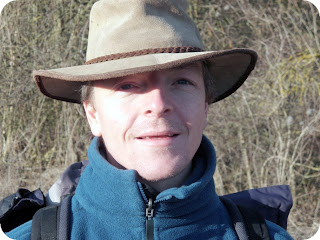 Another birthday? Let's go for a walk!

You know how it is. Another birthday rolls around and while you try to make it special (and you do) it's hard to make it a knock-out affair. The weather didn't help (in that a cold front was scheduled to bring rain to the south-east) but also a level of indecision got in the way of organising a weekend away. So instead we've decided to make the best of it this weekend with a spot of walking and perhaps a visit to our wonderful local Japanese restaurant Tosa in the evening.

And so, to cut a long story short, this is why we found ourselves in Stanmore on a wet Saturday afternoon! It's not somewhere that we've visited before but it's relatively close to us in North London and I'd managed to unearth a route-guide from London Footprints. With the decision made we found ourselves trying to park in some expensive looking suburban streets and ended up at Stanmore Country Park - where the car park itself was utterly empty! Probably not a good sign but we set off in the drizzle up Stanmore Hill and by the time we reached the top and Stanmore Hall it was pouring down:

But we persevered and actually walking along some of the London Loop it was really quite nice to be out in the countryside (well you know what I mean - there were trees and all). Heading up to Stanmore Common we spent a bit of time watching Harrow Rugby Football Club in action (Joshua was actually quite interested for once) before meandering over to Fish Pond and thoughts of maybe escaping the rain and getting back to the car:

Fortunately the steady shower eased off as we walked in solitude around the water's edge and by the time we turned back towards Stanmore we could even make out the Wembley Arch in the distance. Okay it wasn't exactly framed against a brilliant-blue sky but you can't have everything. The fact is that it was nice to be out and about in a place that isn't our familiar home turf:

Track Cycling and the Olympic Velodrome

Remember last year and all the hassle there was over getting tickets for the Olympics? Some people got what they wanted (or even more than they wanted) while others got nothing? Well I was one of the poor saps who came away empty-handed and I so wanted to see something! So when the London Prepares series of test events was announced I was first in line to score myself some track cycling tickets...and I managed to get some for the World Cup tonight.

I tell you this at 5pm today I could hardly wait to get down to the Jubilee Line and travel on to Stratford; which is not something that I'd usually say despite the dubious attraction of the Westfield Centre! Anyway once I'd hooked up with Lenore and we started walking towards the Olympic Park it was hard not to feel a tangible sense of excitement. I mean the Olympics are only four months away and this was going to be my first glimpse of the much-discussed Velodrome:

I was not disappointed! As the double-decker bus drew up outside the arena (no walking across a construction site for us!) my mouth dropped open. I can't say that I've been to many velodromes but this one is something else. With the wood panelling soaring over our heads and the brilliant light from inside pouring out (almost too bright to look at) I couldn't wait to get in and find our seats. And when we do - wow! They are literally right at the back, with the gods in row 23, and the view is amazing; as is the atmosphere.

Once the racing kicked off I have to say that we were captivated. Obviously I knew that I'd enjoy the action but Lenore really got into it; and when a GB athlete was competing well then the place really came alive. We were on our feet screaming and shouting, willing our girls and boys to do their absolute best, the whole arena reverberating with emotion. And they did too. With world records being broken and medals of all colours flowing we couldn't ask for more excitement.

The programme obviously made a big difference, in that it explained all of the different races and how they worked strategically, but the organisation was truly key and exceptionally slick. Race after race ticked by (sometimes separated by medal ceremonies and sometimes not) but for hour after hour the events of all types continued and we never had a chance to get bored. In fact tonight came close to matching some of my finest memories of watching cycle racing (such as the Tour de France) and that's really saying something.

As the evening drew to a close after near on four hours of racing it was nice to think that we would be getting a break from the intensity but my what intensity! This was a night of fantastic racing and entertainment, phenomenally well organised and entirely gripping. I can very much see myself coming down to a track event in the future as this is such a full-on way to experience the exhilaration of athletic performance up close. So it was with a slightly heavy heart but also much anticipation that we bade goodbye to the Olympic velodrome for London 2012: