I guess that I knew that this day would come. I mean nothing lasts forever does it? Somehow though I never thought that it would happen to me; not now and not after we've been through so much together. But the Universe doesn't care and entropy will always get you in the end. 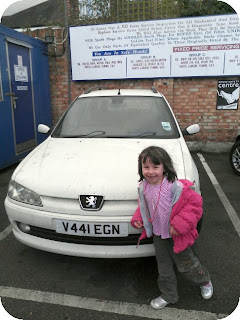 Still I was glad that I was sitting down when Mark from Victory Motors rang me. There was definitely a catch in his voice - almost as if he felt just as bad about breaking the sad news to me as I felt about hearing it. After all I'd only left the car with them for a quick service and MOT - something that Mark has successfully and happily arranged for me for many years now amongst other excellent services. Hardly brain surgery and as Mark said it looked like my car would pull through at first but then they decided to be thorough and take a short test drive and that's when it happened....

One little emergency stop was all it took; a stamp on the brake pedal and it was all over. Corroded beyond endurance my brake line ruptured explosively and with that the braking system had played its last card. It's just lucky, really, that they were on a quiet side-road as the alternative doesn't bear thinking about. Then, to seal the deal, Wayne decided to investigate the sticky rear seat-belt and in prising off a body panel he revealed a whole different level of horror: 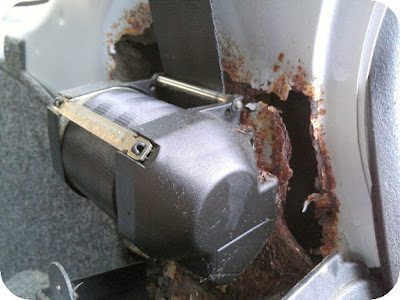 There it is then the final nail in the coffin. All that remains is for me to strip the corpse of its valuables (mainly fiddly bits of Lego that have fallen down the back of the seat) and spend a moment's silence considering the 225,000 miles that this sturdy waggon has managed to cover in a hard-working life. On Monday I'll sign the papers that consign my car to the crusher and that'll be it. For the first time in twenty years I am without a car and actually I feel alright about it; no more repair bills, no more insurance, no more tax and no more traffic cameras. The future looks bright!
Posted by Damian at 17:50